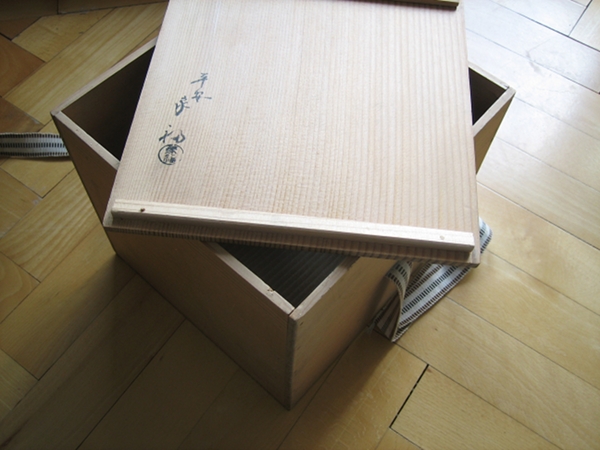 How to make the wrapping a center piece of the product with 6 wooden plates held together by wooden nails?
A couple of years ago I got a plain, humble yet beautiful Japanese wooden box as a present and found another, smaller and rougher one in a thrift store a while afterwards: Only later I found out that the first box I got is one which was once used to wrap ceramics in Japan. There, these wooden gift boxes go under the name of tomobako. They are made from the very soft, light, extremely fastgrowing Paulownia wood which is also known for its environmental sustainability. Most of these boxes are joined with wooden nails, have the lid closed trough two wooden rails and come along with a calligraphy.
What I like about these boxes and think makes them worth giving them a second look is that they are already a design object in themselves in a sense that they still can be used after the product came out of the packaging. Not ending up in the trashbin, the wrapping becomes important in itself as an object. There is another idea which goes along here: to turn also the wrapping into an limited edition. Pretty often, seemingly the box is nearly as much valued as the piece inside and is one of a kind. Speaking generally, all it comes down to is the idea of making the wrapping an unique usable object in itself.
Apart from that I love the plain side of this wrapping and how the product’s and artist’s names are placed in a very “simple” manner. Nothing machine done. Old-fashioned handwriting which tells already a lot about the artist.