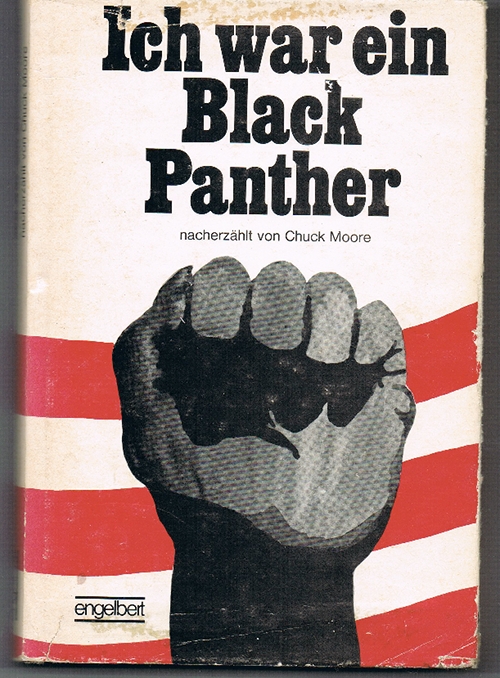 Which kind of typography influenced this book cover above? The answer will bring you back in time to the visual branding of the Black Panther Party. Actually, there is one person behind shaping the image of this organization: Emory Douglas.

22-year-old Douglas joined the Black Panther Party in 1967 and instantly became responsible for the layout and publication of their newspaper. Main issue of his work was “to communicate ideals and the issues that we were concerned with” as he tells staff at Urbis.
His education in lay-out started in detention where he worked at the prison’s printing shop. Before that he had passed his youth in a “kind of hard core environment, not in the sense of family life, but hanging out on the streets and not going to school and all those things” as he describes it in an interview with Com-raid.com. Being released after 15 months, he studied commercial art at San Francisco City College. He directly put this formation into practice in creating the Black Panther Newspaper and its posters. “His posters were not displayed on pristine gallery walls, but were pasted”, how Colette Gaiter states, “on abandoned buildings in ghettos, and the newspapers sold on street corners and college campuses all across the United States”. 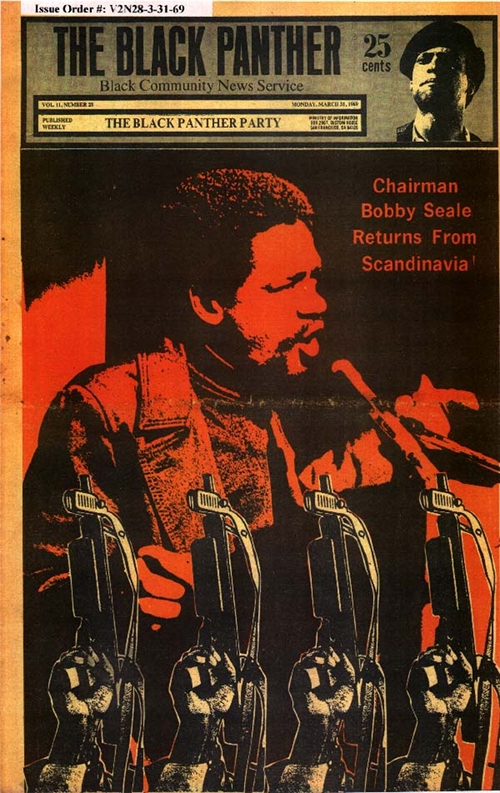 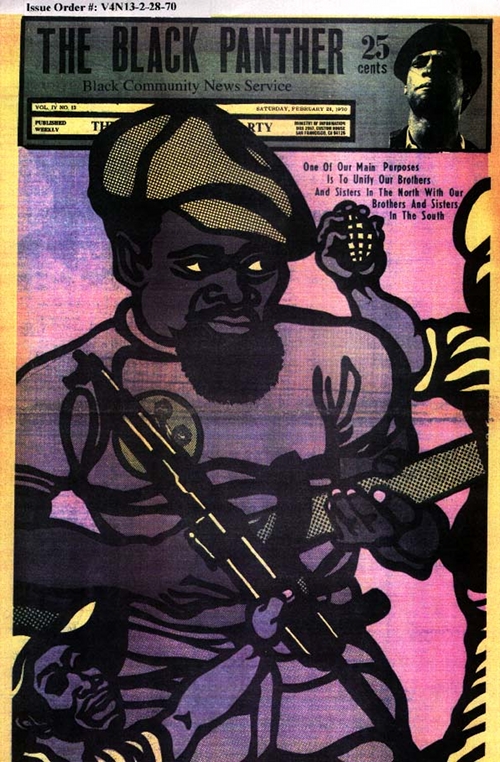 Douglas thus states in his Position Paper #1 on Revolutionary Art (1968):

“The ghetto itself is the gallery for the Revolutionary Artist’s drawings. His work is pasted on the walls of the ghetto; in storefront windows, fences, doorways, telephone poles and booths, passing buses, alleyways, gas stations, barber shops, beauty parlors, laundromats,  liquor stores, as well as the huts of the ghetto. (…) Revolutionary Art is learned in the ghetto from the pig cops on the beat, demagogue politicians and avaricious businessmen.  Not in the schools of fine art. The Revolutionary Artist hears the people’s screams when they are being attacked by the pigs. They share their curses when they feel like killing the pigs, but  are unequipped. He watches and hears the sounds of foot steps of Black People trampling the ghetto streets and translates them into pictures of slow revolts against the slave masters, stomping them in their brains with bullets, that we can have power and freedom to determine the destiny of our community and help to build ‘our world’.” 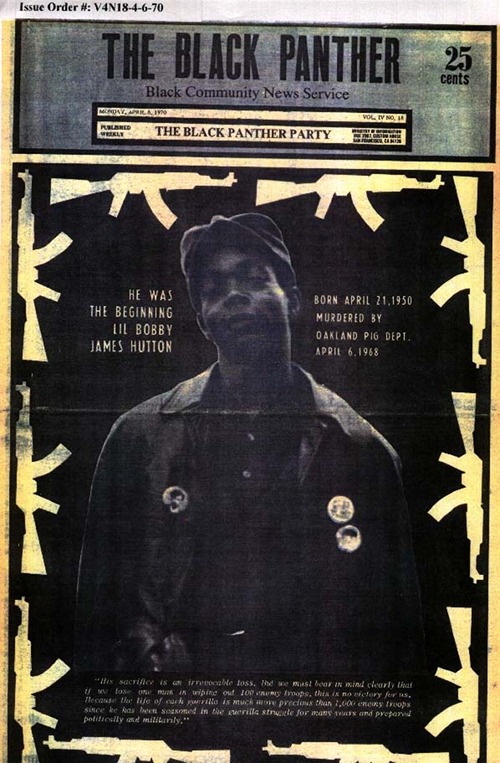 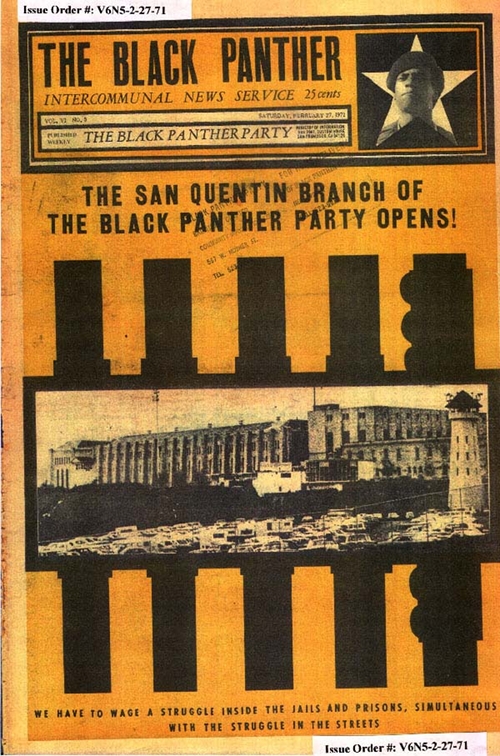 To fullfill his mission, Douglas was not very well equipped technically. “It was a very grassroots kind of look, low-tech,” he says in an interview with Alice Ross and explains further: “We didn’t have a newspaper press, but we built our own small multi-lith press and we used to print posters and booklets and those kind of things”. He keeps on: “For the art itself, I used a lot of prefabricated materials, letter sheets and stuff like that to make the textures and patterns of the line drawings”. One of the main features of his design was thus a collage of drawings and photos combined with thick black outlines. One symbol which runs through all of his work are pigs drawn in a cartoon fashion and symbolizing policemen and in a larger sense the capitalist system. Visual influences Douglas names are mostly war resistant posters from Cuba,Vietnam, Asia, Africa and Latin America.
He constantly worked under a 24/7 surveillance of the FBI who wanted to see the newspaper being discontinued. FBI agents, so writes Colette Gaiter, “contaminated printing facilities, enlisted Teamsters to refuse shipments and even convinced United Airlines to cancel the paper’s bulk mail rate discounts”.

Here an interview with Emory Douglas and studio visit in his San Francisco home in January 2008 by Babylonfalling.

More on Emory Douglas:
Two other very interesting and informative interviews with Emory Douglas are to be read at com-raid.com and aiga.org.
More works are to been seen at itsabouttimebpp.com or bobbyseale.com
There is also a book out with the works of Emory Douglas by Sam Durant called “Black Panther: The Revolutionary Art of Emory Douglas” if you prefer paper over digital.

To conclude another two Black Panther Party prints who just fit into this even if I didn’t find any information if they are done by Douglas or not. There is actually a huge discussion going on between the Veterans of the Civil Rights Movement who drew the Black Panther Logo – Ruth Howard Chambers, Dorothy Zellner and Jennifer Lawson are named-, but you can also read that Douglas cleaned the logo up for further use. 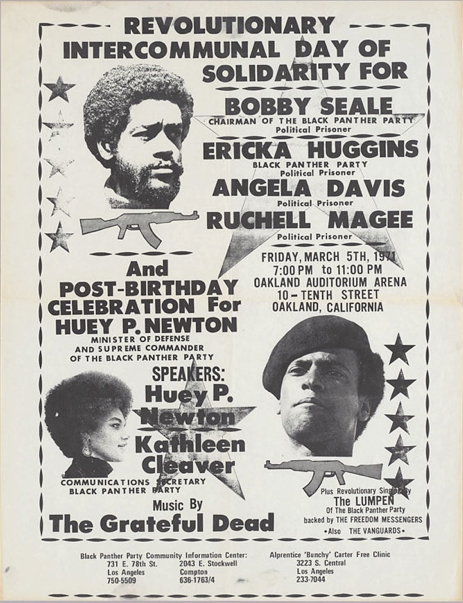 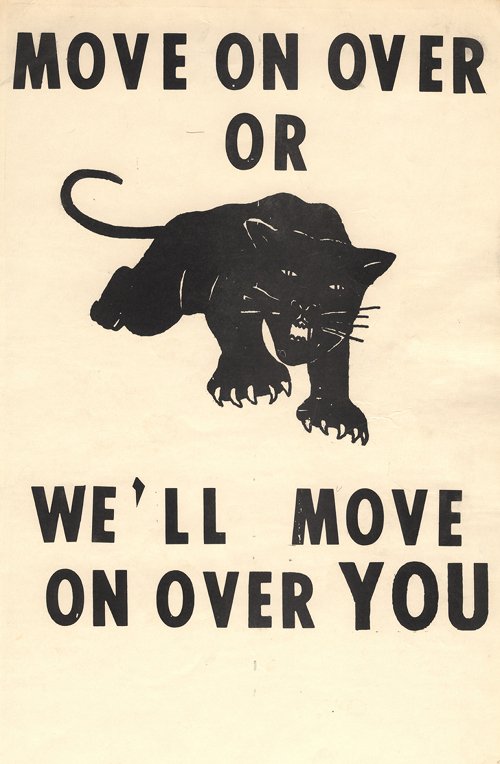 Black Panther Poster “Move on over or we’ll move on over you” from www.archives.state.al.us